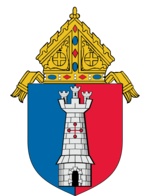 The Catholic Diocese of Toledo

We look to early nineteenth century settlers who traveled to this area with their most prized possession—their Catholic faith to lay the groundwork for our diocese. The Irish came as laborers for the building of the canals, and later the railroads; the Germans came searching for land that they would clear and transform from swamps into fertile farms; the French, Hungarians, Italians, Mexican-Americans, Poles, Slovaks and African-Americans came placing their talents in the service of industry; missionaries followed to minister to the spiritual needs of these pioneers. This rich diversity continues to give life to the diocese.

Our churches, schools, hospitals, and other institutions are reminders of the sacrifices and generosity of the early Catholic families. Hard work, an adventuresome spirit and strong faith characterized our religious forebears. They were generous stewards of God’s many blessings as evidenced by the magnificent churches and schools. We, their children and grandchildren, have been the beneficiaries of their stewardship.